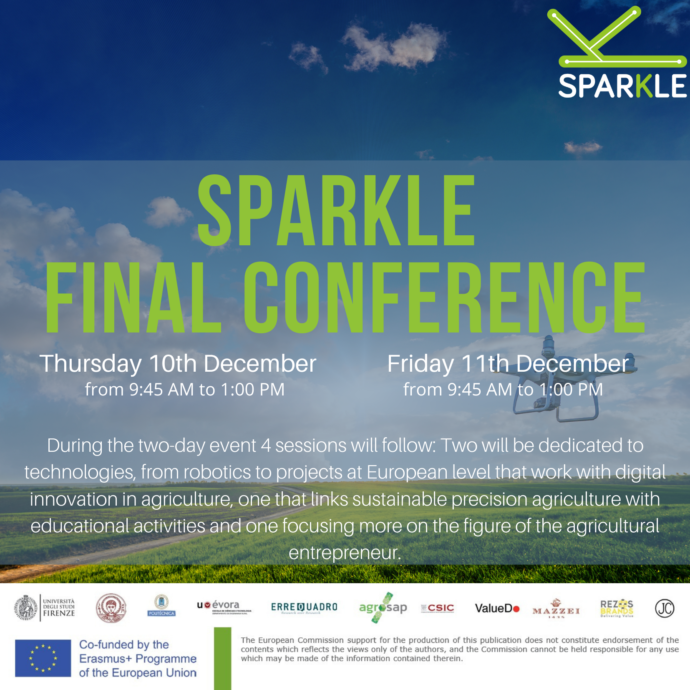 On 10 and 11 December the final conference of the SPARKLE project was held online on the Webex platform (Full program here). During the event, the University of Florence, as Lead Partner, invited representatives of all target groups: students, agricultural entrepreneurs, academics / researchers and also public and research bodies.

The first session, “Precision Agriculture and Training”, was chaired and managed by Alessandro Guadagni, project manager of ValueDo srl, a company that took care of project management for its entire duration. In this first part, the logic that characterized the project was presented, namely the concept of “Sustainable Precision Agriculture” and the main results achieved in the last three years. In particular, the Moodle platform was described, as well as the process of developing training materials, where a key role was played by the winning interaction between universities and partner companies. In addition to the leader represented by Professor Marco Vieri, the various representatives of the partner universities took part: Constantino Valero for the Polytechnic of Madrid, Thomas Bournaris for the University of Thessaloniki and José Rafael Marques for the University of Evora.

Angela Ribeiro of the Superior Council for Scientific Research (CSIC) in Madrid managed the second session “Precision Agriculture and Technology”, aimed at illustrating how the key concepts of the project field work in practice and showing the benefits of methods selected and adopted. Partner companies that already apply Precision Agriculture also took part, demonstrating how this represents the future of agriculture itself.

The discussion on “Precision Agriculture and Technology” continued the next day, 11 December, managed by Professor Manuel Perez (AgroSap). We talked about robotics and digital innovation, issues that introduced the fourth and last session managed by Riccardo Apreda, representative of Errequadro, on “Precision Agriculture and Entrepreneurship”, during which the winning students of the “Business Model Competition” also took part. ”Announced by the project. Their participation turned out to be interesting and I produced a strong interaction with the audience: the boys were able to share their experience thanks to the SPARKLE project and present their works that allowed them to win the competition.

All SPARKLE partners hope that the Final Conference of the project has inspired the audience to consider Precision Agriculture as a fundamental element to improve and renew the concept of agriculture. The event confirmed all the expectations and good intentions of the last three years, perfectly in line with the evolutionary process of the project that created a strong and cohesive partnership, certainly destined to work together again.