This year, at the European Congress on Precision Agriculture (ECPA) that was held in Montpellier (France) from the 7th to the 11th of July, there was a very interesting presentation from the renowned Professor James Lowenberg-DeBoer, head of the Elizabeth Creak Chair of Agri-Tech Economics, at Harper Adams University, Newport, Shropshire UK.

He presented the last results concerning the real adoption of precision farming around the world, based on the consolidation of data from many surveys collected throughout the last years. His work, which has been published as an open-source review article at the Agronomy Journal, can be downloaded at https://dl.sciencesocieties.org/publications/aj/abstracts/111/4/1552

In this article, Prof Lowenberg-DeBoer states that there is a general perception by the public and governments that the adoption pace of precision agriculture has been slow. However, he also suggests that it is not true that, from the wide spectra forming the toolkit of precision farming technologies, all of them have been scarcely used or adopted. In fact, some of them as guidance systems for agricultural machinery using GNSS positioning, and sprayer automatic control have been adopted as largely as other previous farming technologies that induced big changes in crop production in previous decades.

Surveys performed in the United States of America from 2000 on, indicate that in the case of maize, 59% of the cultivated land is nowadays planted with a tractor using a GNSS equipment and some kind of auto guidance, as the graph depicts. 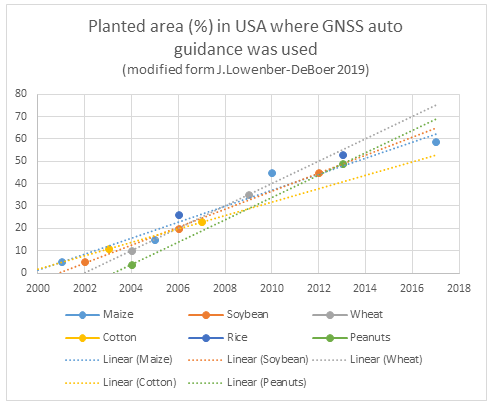 On the other hand, variable rate technologies are commonly associated with precision agriculture, but although its adoption was fast initially, survey data indicate that their usage has not grown in recent years, perhaps due to a lack of trust from the farmers. Only 20% of farms use them nowadays.

Also on the other side of the spectrum, non-mechanized agriculture does not use precision farming technologies, even though many recent studies indicate that small pieces of technology wisely applied (such an app on a smartphone) may do a big difference for farmers in developing countries.

More studies as this one from Prof Lowenberg-DeBoer are needed to get a clearer idea of the reality of Precision Farming worldwide. But in fact more surveys, correctly planned and strategically performed along Europe, on a regular basis, are needed in order to understand the reasons why certain pieces of technology are successful in the fields, while others seem to be still difficult to adopt.