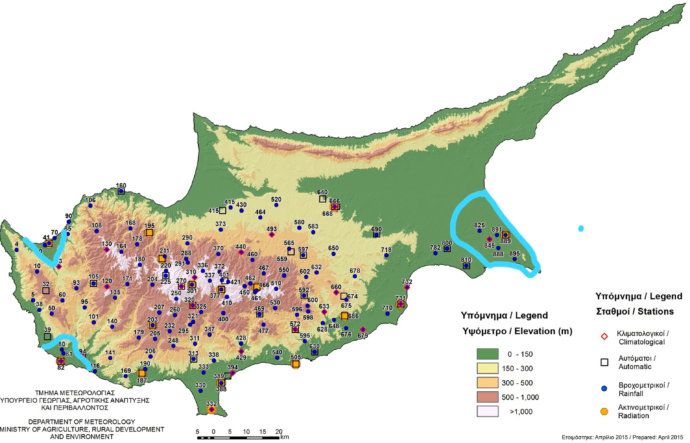 Water allocation to crops, and especially to the most water intensive ones, has always been of great importance in agricultural processes. Deficit or excessive irrigation could create either crop health-related problems or water over-consumption, respectively. The latter could lead to groundwater depletion and deterioration of its quality through deep percolation of agrichemical residuals. In this context, and under the current conditions where Cyprus is facing effects of possible climate changes, the purpose of this study seeks to estimate the needed crop water requirements of the past (1995–2004) and the corresponding ones of the present (2005–2015) in order to test if there were any significant changes regarding the crop water requirements of the most water-intensive trees in Cyprus. The Mediterranean region has been identified as the region that will suffer the most from variations of climate. Thus, the paper refers to effects of these variations on crop evapotranspiration (ETc) using remotely sensed data from Landsat TM/ETM+/OLI employing a sound methodology used worldwide, the Surface Energy Balance Algorithm for Land (SEBAL). Though the general feeling is that of changes on climate will consequently affect ETc, our results indicate that there is no significant effect of climate variation on crop evapotranspiration, despite the fact that some climatic factors have changed. Applying Student’s t-test, the mean values for the most water-intensive trees in Cyprus of the 1994–2004 decade have shown no statistical difference from the mean values of 2005–2015 for all the cases, concluding that the climate change taking place in the past decades in Cyprus have either not affected the crop evapotranspiration or the crops have managed to adapt to the new environmental conditions through time. The results indicate that actual crop evapotranspiration has not been affected for the crops that were under investigation. The statistical analysis has pointed out that the changes on the island’s climate have no significant effect on the evaporation and transpiration mechanisms which rely on many meteorological parameters. Though it was expected that these changes would affect actual evapotranspiration, the null hypothesis (climate change would affect the crop evapotranspiration) is not rejected, since for all the cases actual evapotranspiration has not been affected statistically. Of course, the paper refers to the most water-intensive crops of Cyprus’ rural economy and to all the crops. Future work will consist of the same method application for other specific crops.