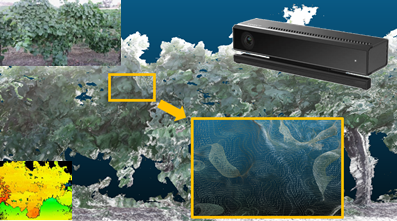 An innovative meeting took place during December at the University of Hohenheim. Researchers from CSIC and this German university (UHOH) discusses an agenda for future challenges in Precision Agriculture. The Artificial Perception Group (GPA-CAR-CSIC) showed the possibilities of the use of RGB-D cameras and photogrammetric reconstruction for three crops. The applications and possibilities for variable rate application (VRA) were discussed. The use of these novel methods was discussed with researchers and students, and an overview of the SPARKLE project was shown. The students demanded the transference of knowledge and the training in new tools for agriculture. The showed methods were the use of RGB-D sensors and RGB images in combination with 3D reconstruction algorithms. The use of new 3D modeling techniques has a strong impact in plant phenotyping and novel methods need to be assessed at different conditions and crops. The use of 3D structural models can improve the decision-making processes. New applications for sensors different from those traditionally used in plant phenotyping are opening up. However, there are still some issues that must be solved, such as a proper reconstruction of end-details needed in some phenotyping programs. The 3D scene can be reconstructed by a single camera shooting around the object or by using multiple cameras around the object to be reconstructed. For model reconstruction, some parameters should be fixed prior to image acquisition. The distance from the camera to the target should be established based on the focal length of the camera, in order to reach a proper overlap between images accordingly to the reconstruction algorithm. CAR-CSIC showed that plant modeling could provide a more detailed overview of the basis of plant development throughout the life cycle and how accessibility and availability of this information to agricultural managers enables more sophisticated and educated decisions.