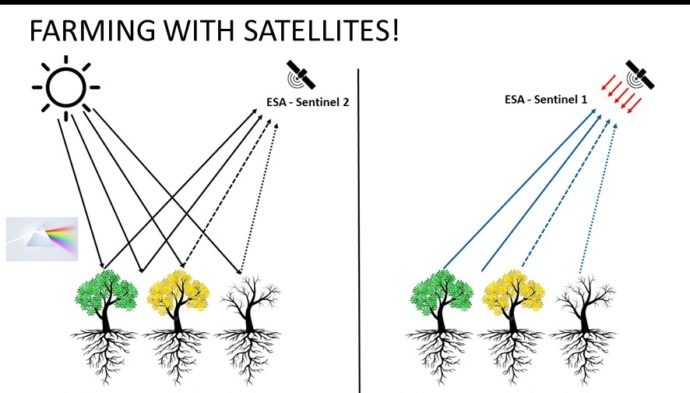 Let’s focus on the type of sensors, especially on those that are used in agriculture. The sensors usually measure energy and can be divided into passive and active sensors. Passive sensors measure the sun energy reflected by objects (left side of the Figure). Active sensors have their own energy source, projecting it towards the objects and then measuring the energy that is reflected (right side of Figure).

The Sentinel 2, controlled by the European Space Agency (ESA), includes passive sensors that use the optical range of electromagnetic spectrum. To explain it in a simple way, do you remember the rainbow? Well, the rainbow has several colours, as well the remote sensors have different types of glasses reading different types of “colours” in the radiation spectrum. With near infrared glasses the vigorous plants look brighter than the less vigorous ones. The water for instance will look very dark. That is, the very vigorous plants reflect much more radiation in the near infrared and the water reflects very little radiation in this range of the spectrum.

In summary, the optical sensors look at the surface of the Earth with different types of glasses, (blue, green, red, etc.) interpreting the response of objects to this different glasses. The application of these sensors in agriculture is very important because they can distinguish between vigorous and less vigorous plants and this may be useful in planning nutrition, irrigation, or other treatments.

The Sentinel 1 (ESA), has active sensors and uses the range of microwaves to look at objects on the surface of the Earth. The sensors on board these satellites have a radiation source of their own that is projected onto the objects and, depending on their characteristics, this radiation will be more or less reflected back to the sensor. By the ratios between the energy emitted and reflected we can study the type of objects and their structure.