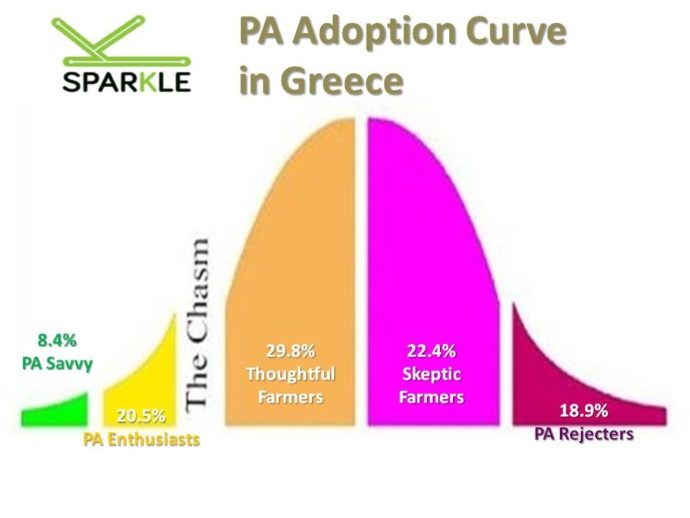 Rapid socio-economic transformations in several European countries make imperative the need to create new scopes of agricultural practices, especially concerning precision agriculture (PA). The implications of dramatic shifts from economic development, the financial crisis, urbanization and energy consumption reordering are immense. In addition, the high-tech nature of traditional PA technologies developed in advanced countries has created a real challenge for engineers to search for suitable PA technologies that can be adopted to countries such as Greece. Application of balanced soft- and hard-PA technologies, based on the specific socio-economic conditions of a country, is expected to produce PA suitable for other countries facing similar socio-economic conditions. ‘Soft’ PA depends mainly on visual observation of crop and soil, and management decisions are based on experience and intuition, rather than on statistical and scientific analysis. ‘Hard’ PA utilizes all modern technologies such as global positioning systems, remote sensing, and variable-rate technology. SPARKLE, acronym for Sustainable Precision Agriculture: Research and Knowledge for Learning how to be an agri-Entrepreneur, is part of ERASMUS+ project and is supported by the European Commission with a budget of EUR 800.000. Among others SPARKLE attempts to reveal the heterogeneity of farmers in Europe and especially in Greece, Italy, Spain and Portugal. Who is really adopting PA and who is not? Can E.U. agriculture be seen as a homogenous space or do different types of PA adopters exist? One of the main objectives of SPARKLE is to investigate how the E.U. agricultural sector is adopting and using PA techniques. Additionally, SPARKLE set out to explore the socioeconomic barriers to PA adoption, the farmers training needs and tries to close innovation divide on entrepreneurship and effective application of PA among Academia, Farmers and Agricultural students.

In this context a research was carried out in Aristotle University of Thessaloniki in order to determine to what extent farmers are adopting and using PA technologies in Greece. Primary data were used, which were obtained from a questionnaire addressed by a very large sample of more than 2,000 farmers from all thirteen Greek Regions (2016-2017). Information was also obtained on farm attributes, on sources of information that they use for adopting these technologies, on their impacts on these farms and on obstacles hindering their adoption. Both descriptive statistics and multivariate analysis techniques were used in order to explore the different levels of PA adoption and to classify farmers in discernible clusters (typology), with similar PA adopting behavior.

The main conclusions of this research suggest that Greek farms adopting and using PA practices reap benefits, such as managerial improvements, higher yields, lower costs, minimization of environmental impacts and quality improvements. On the other hand, results support the notion that, the lack of “social capital” in rural areas adds to the technological gap amongst farmers, slow adoption of PA and lower levels of overall economic – rural development.

According to the descriptive statistics analysis the representative farmer in Greece is male, about 38 years old, married, with 11.8 years of education and their household is comprised of 2.4 persons. Basic figures regarding their farm indicate that more than half (53.8%) are occupied in farming full time, gain a median monthly income of 986€ and 51.6% of their total income come from farming. The average distance of the households/farms from urban areas is 35.8 kilometres and internet access is found in almost two third of the sample.

Using clustering methodologies it is possible to categorise the farmers based on their attitudes towards a suite of PA adopting (or not adopting) reasons (statements). In particular, employing a two-step cluster analysis, based upon the agreement level of the following nine attributive items: (1) I believe that PA improves my life, (2) I believe that PA enhances my productivity, (3) I want to be the first to adopt new technologies, (4) Others are asking me for advice on new technologies, (5) I feel very comfortable with new technologies, (6) PA increases the risk in my farm, (7) I want to learn more about PA, (8) I don’t understand how to use PA effectively, (9) PA is expensive (1=strongly disagree, 2=disagree, 3=neither agree nor disagree, 4=agree and 5=strongly disagree), the farmers were classified in some discernible clusters in order to explore the different levels of PA’s adopting behavior. Regarding the distribution of observations in clusters, depending on the reasons of PA adoption, the first cluster is constituted mainly by “PA savvies” who want to be the first to adopt PA and other farmers looking to them for advice about PA and new technologies. The “PA savvy” segment was very comfortable with new PA technologies. The second largest group was identified as “PA enthusiasts” and were characterised as being enthusiastic adopters on PA because it makes farm life easier and enhances their productivity. The largest category, “Thoughtful farmers”, were characterized as recognising that they needed to learn more about PA because they do not understand how to use PA effectively. The fourth cluster, the “Skeptic farmers”, were categorized as being those who believe that PA increases their farm risk. The farmers of the final cluster were identified as “PA rejecters” and were categorised as being those who pretend that PA is expensive. Although, many of them admitted to not understand new PA technologies they showed very little interest in learning about them. The two-step cluster method extracted automatically the optimal solution of five clusters. The majority of the farmers (29.8%) were included in the third cluster, 22.4% in the fourth cluster, 20.5% in the second cluster, 18.9% in the fifth cluster and finally only 8.4% in the first cluster.

This segmentation is sufficiently close to Rogers socioeconomic generalizations of adoption/diffusion theory. More specifically, the “PA savvy” can be characterised as “Innovators” (brave people, pulling the change), the “PA enthusiasts” as “early adopters” (respectable people, opinion leaders, try out new ideas but in careful way), the “Thoughtful farmers” as “Early majority” (careful but accepting change more quickly than the average), the “Skeptic farmers” as “Late majority” (will use new ideas or products only when the majority is using it) and finally the “PA rejecters” as “Laggards” (traditional people, caring for the “old ways”, are critical towards new ideas and will only accept it if the new idea become mainstream or even tradition).

From a practical point of view, identifying the reasons driving farmers’ adoption (or not) of new innovative PA practices is important for the agricultural society, policy makers and related economic sectors. In particular, the typology of farmers along with their perceptions regarding PA adoption can provide useful policy insights on the ways that PA can contribute to diffusion of innovation and rural development. This exhaustive review of the present status of PA in Greece is expected to help find out the adoption trend and direction of future research. The contribution of this research is in having examined, for the first time, the adoption parameters of PA in Greece for which there has been longstanding interest. Moreover, there are no studies available at present to indicate the extent to which PA technologies are being used in the country.