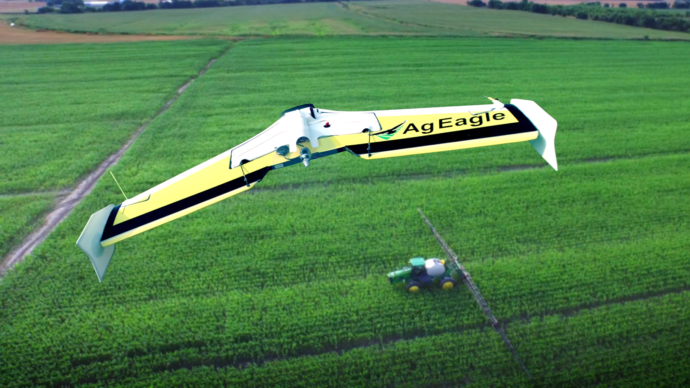 In recent years, precision agriculture has used innovative methodologies and disruptive technologies to meet the challenge of producing more with less.  Drones are a technology with almost a decade, whose democratization in the last 4-5 years offers new opportunities in the field of agriculture.

The current regulatory framework restricting the use of drones in urban areas has made the agricultural sector one of the main workspaces for drones. Compared to satellite imagery or a manned aircraft, drones give a closer, more accurate, affordable and on-demand monitoring of farms divided into manageable zones. This is why they have become very popular platforms for generating crop vigour maps, obtaining water status information, or even detecting diseases and problem areas.

For agricultural tasks, the two main types of equipment available can be used, multi-rotor, and fixed-wing vehicles, depending on the characteristics of the task itself and the requirements it has. 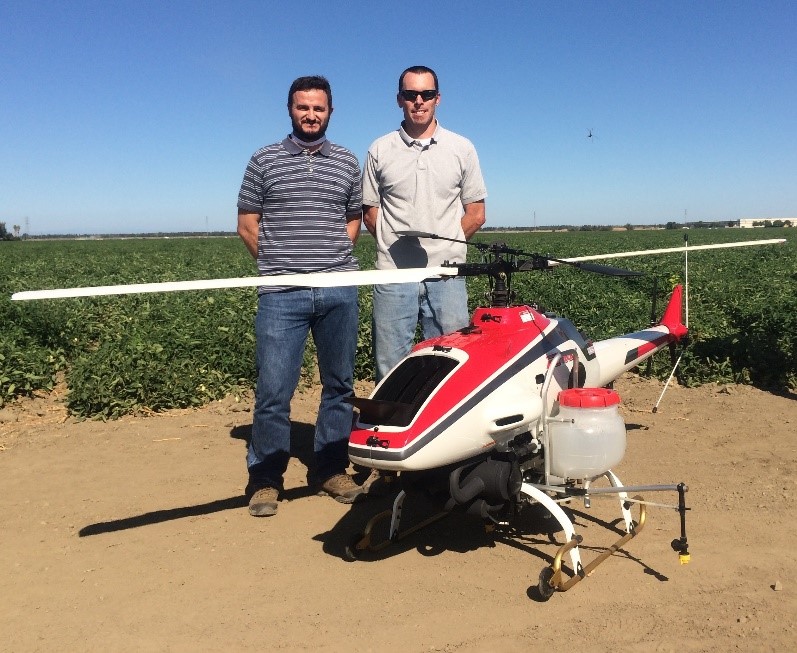 Figure 1. Yamaha RMAX helicopter with agricultural spraying equipment. To the left is Professor Manuel Pérez-Ruiz, to the right Ryan Charles Billing. Photo courtesy of the University of California, Davis.

Each system has its own advantages and disadvantages, making them more suitable for one agricultural task or another depending on the characteristics of the work to be done. Due to their ease of take-off and landing, multi-rotors can be used by inexperienced pilots (always with a license) and in situations where the space to operate is limited. They also tend to be lighter, lighter, and have an easy-to-use interface. Their disadvantages compared to fixed wing equipment are energy consumption, slower speed (15 to 40 km/h), and limited flight times (10 to 30 minutes). These flight characteristics usually cover 20 to 30 ha per flight (depending on the type of task to be performed). Moreover, in the event of a power loss or mechanical failure, multi-rotors do not have the capacity to plan, which can lead to the total loss of the aircraft and its load.

On the other hand, fixed wing drones offer longer flight times, lower price, and faster speeds (from 30 to 100 km/h), which translates into a larger covered area. They can also plan in case of system failure, thus protecting the sensors and other components they carry. The disadvantages are in take-off and landing, which usually require a clear and obstacle-free area. In addition, fixed wing equipment usually requires an experienced pilot to take over in the event of failure of the autonomous control system, and because of their larger size, they can be more difficult to transport.

Typical flying times for a fixed wing are 30 minutes to more than an hour, and although most can cover between 30 and 130 hectares, current regulatory limits require keeping the equipment within the pilot’s line of sight, which restricts the area of coverage to approximately 60 ha.

There are many applications of the use of drones in agriculture that we can see in the media, but there are few that truly present a positive economic balance at the end of the year for an operating company. The generation of maps with specific areas of weed infestation, maps of the nutritional state of the crop (e.g. nitrogen) and the design of variable irrigations based on maps of crop temperatures, are three of the most popular and profitable applications of this technology.

Today, it is still difficult to say whether the use of this technology is profitable, widespread for all farmers. Many variables come into play when it comes to profitability.

However, despite this boom, there are some interesting questions to ask: is the agricultural sector in general, and in particular its main actors (cooperatives, associations, service companies, etc.), ready to incorporate technology involving remote sensing, information systems, robotics, advanced engineering and aviation?  More importantly, is the use of drones in agriculture profitable?

In a survey conducted a couple of years ago, PA services offered by American companies to farmers were evaluated. The results of that survey reflected that almost 82% of those services simply consisted of delivering the maps obtained with drones to the farmers.

From our perspective, this type of “Printed-map as a service” is nonsense, since the producer does not have to know how to interpret in many cases the information coming from fields such as remote sensing. These maps are useless if the farmer does not have variable application equipment capable of optimally distributing or reducing the amount of product to be applied. A clear example is the use of weed infestation maps, which are very useful if the farmer has a sprayer capable of applying in a variable and precise way.

And in many cases he will not be willing to pay for it.

Figure 2. Results on the survey conducted by Dr.Bruce Erickson and David A.Widmar about how PA services were commercialized in the US.

As can be seen, these uses primarily involve the generation of maps that can be used to design a variable application of inputs.

In spite of this, there is at least one agricultural operation where the use of the drone can help in a very reliable way and which is generating a lot of interest in the sector, achieving some companies a positive commercial balance: the variable fertilization of nitrogen in cereal based on multispectral images.

During the last three seasons, some cereal and grain producers in southern Spain have commercially available nitrogen fertilizer application maps created from information collected by drones (Figure 3). This same “prescription map” can be digitally loaded into a variable fertiliser spreader to make an “intelligent” application, which reduces the volume of fertiliser required and represents an interesting economic saving for the farmer. This service is available thanks to the initiative of a technology-based company created by professors and researchers from the universities of Seville and Cordoba. AGROSAP’s team of technicians has developed this service as a new business model through its division specialised in working with drones for agriculture, Dronsap, and thanks to it, cereal producers in the area are achieving savings of between 15 and 20 percent in their fertiliser costs. 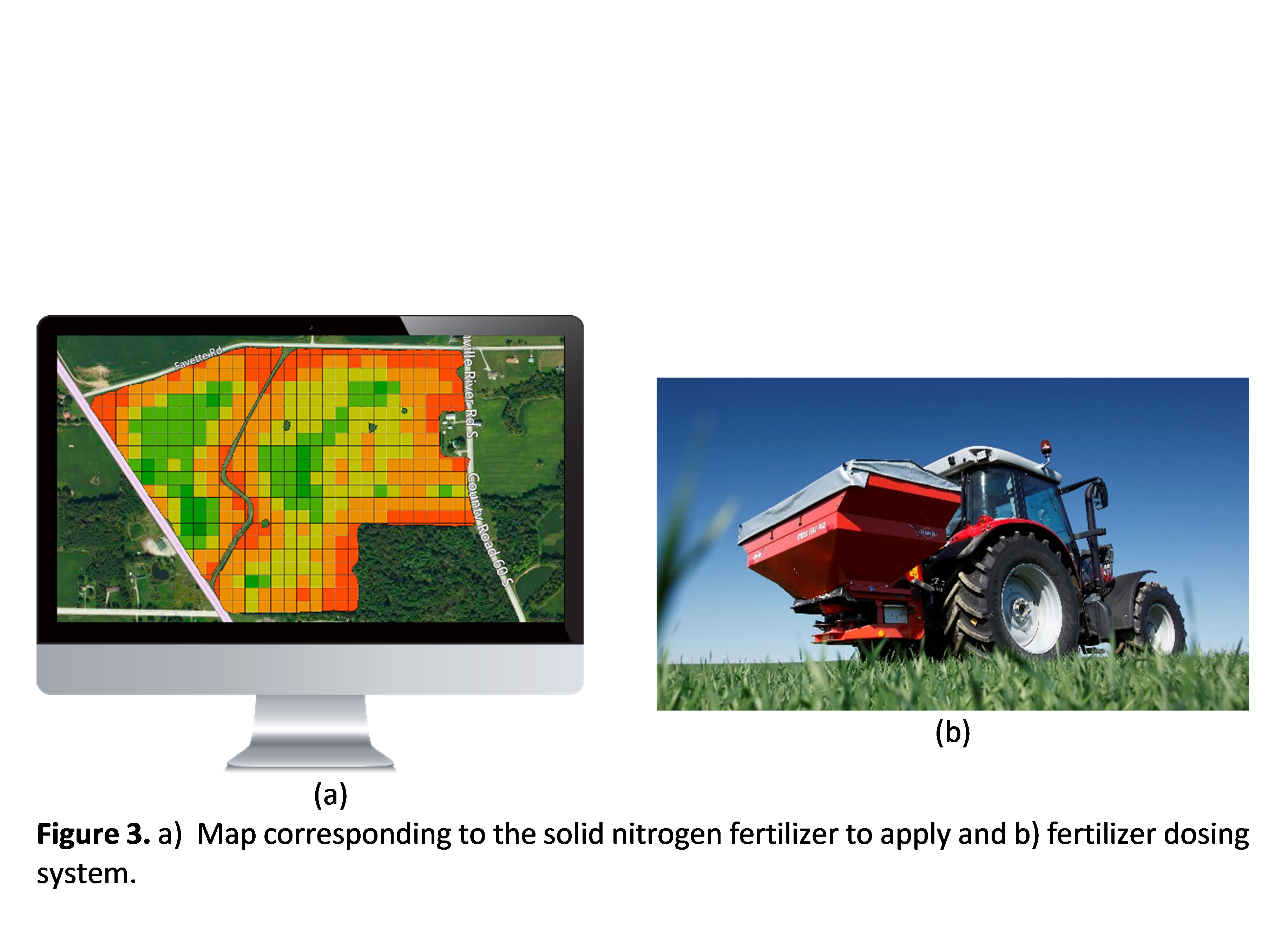 Perhaps one of the most interesting analyses of this experience, at least on a commercial level, is the fact that it is a product that farmers can hire from their usual agricultural service providers, which brings these technologies closer to a much wider public and normalises their use. This type of solution is a good example of what new technologies bring to today’s agriculture: cost reduction and increased work capacity.